taken from: dailykos
….we have waited a while, in order to observe in which direction this Ritual was heading; but it is clear enough now: the Invoking one.
The theme is not so much ‘trumpet’, as in strict sense of Revelations, since trumpet is related to “voice”;
but to the Greek root as the word THRIAMBOS, later used by the Roman army, when,
after having conqered other lands, marched through Rome to show their victory, in a thriumphant procession;
…the original Greek/etruscan context of Thriambos was an epithet of Dionysus [Thoth], where people honoured him by making processions: either “clean ones”, thriambos, or vulgar ones, dithriambos;
where the first represented “order”, the latter “disorder” — but both are aspects of the
same egyptian realm of Dualism; making the very term THRIAMBOS literally readable as “restoring the Order”.
– the tactic is Obvious:
first present a “choice” between a candidate of the Old Garde [a non-choice] and this man; then let him to announce certain laws, while at the same time you organize massive protests agáinst those laws — and so play both sides of the people:
hundreds of millions who daily do nothing else as Invoking the THRIAMBOS attribute
[because it is irrelevant, in Ritual sense, to be “against” or “pro”: only the invoking counts].
What happened, recently, is but an aesthetical change in worldpolicy:
gone is the ‘cabal’: yet nothing really has changed but the Mask.
The rest we leave up to you, to tie together: the good man’s first name, the overt circus created by MSM, which Institution has the oldest legal rights to the West [and ask yourself how come that the country who is their personal bodyguard rules from “Mary-land”], etc…
Posted: February 1, 2017 at 2:00 am by loNe
Last Modified: September 28, 2017 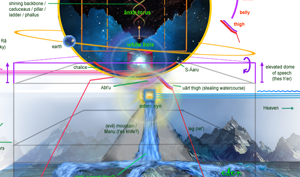