From Orion to Saturn: Inversion of Reality

source: venerabilisopus
View the above image in the full size

1] glyphs of inversion: Orion to Saturn – SAH’ and H’ET

Before going into the strange construct named Orion, we would need to know some about it’s nature, and the first problem is the absolute Mystery, how also Orion contains the glyph S, ‘adamite soul’, but next to that also the H’ from Saturn, and the “backwards” glyph Sa; 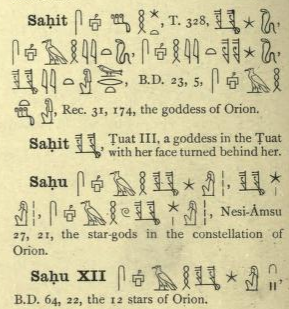 ..making a common nomer for the sigils used, SAH’ should read, the star / of the double-blueprint / for Saturn’s  / backwards vulture rule / over the adamite soul ;  where the double-glyph is either “bone, skeleton” or “record, blueprint”; but the main point of the whole glyph is the Sa, not just “back” but “backwards” — unnatural, backwards blueprints for the Adamite soul, is what Orion provides:

the second glyph used for Orion is the cluster QET, first for the boat of Orion; the added S as prefix usually is something like “to make + verb”; it reads [Orion’s] boat / of the [stolen] word, inside / of orbiting / blueprints

and there we have a most unscientific concept: the ‘travelling boat of Orion’ must refers the constellation itself orbiting…. which implies that áll of our starry sky is rotating around us……

The theme of Transformation [KHEPER], reached by “revolving light”, is addressed in several PT spells – it appears to be a rather common ‘method’ for Them, to both strip Down the adamite soul, as well as to add a different consciousness to him…..

In our terminology, this revolving light may function like our 3-D PRINTER: rotating around an object, and slowly ‘building’ a complete new type thing –…and if you look at the QET cluster, those themes are indeed incorporated: 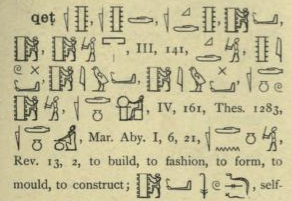 that seems Bizarre: but several PT mention “the revolving light causing our matrix”, like PT366,629b] all [of] . Saturn’s hidden background . [as] the light . revolving .”, [and no he does not address planets nor the sun here – he knew the difference!]. The texts do not give exactly a clear concept about the mechanics, itself, but in several places this very rotation seems to happen: around the SH-pool, surrounded by the rotating Serpent coils SHEN, meaning “orbit, revolution”; but also in the H’ER, which is a geometrical sphere of revolving crystalline flesh, creating our common ” i ” in there – we will upload the corresponding texts for these concepts –

….it appears that the higher the dimension, the higher the frequency, [and this is not about some “electromagnetic frequency spectrum ” – but superseding it]; and in order to let the body we have now to function in earth’s reality, that frequency had to be brought down: PT describes, as far we gathered that concept now, a diminishing of [earth’s] Time by a fractal of eight – per eight “hour-goddesses” Nuiu; implying that everything wé consider as “Time”, and it’s flow, is down by a fractal 8 – and the “motor” of this low present frequency, is the solarplane, itself!

…and since all of PT, CT and BD constantly describe this earth and those who live in it as “ensealed in a Tomb”, only being aware of the low-frequency Matrix [which they created!], we suggest that there are many area’s to be explored, still…. and yes also on this site…

it’s derivation, QET and QETNu, translate as “travelling / blueprints / of Orion”, in a gutteral step-down to KHET, then to H’ET, house of Saturn, so the relation between Orion and Saturn must be a step-down;

— the double-blueprint glyph of Duality:

a clue is SAH’uT, “goddess with face turned behind her”, Tuat III, see first text glyph on this page; the expression represents Duality, akin to the deity Janus [a version of Thoth] with two faces; therefore the double-bone in the SAH’ has to represent the same Duality: that is, several stolen aspects were copied into their Dual [and therefore Doubled];

..similar, is happening here: though Orion shows a number of 12 stars, SAH’U XII, see same text glyph, it’s core was a number of seven stars of Orion – which are the ÁTER XII, and listed as

The names of the other five stars of SAH’U XII are not given; but you can see that all the above names denote aspects of Eden, shown by SH, P, UA and S, and are the seven stars of Orion in the glyph ÁTER VI. 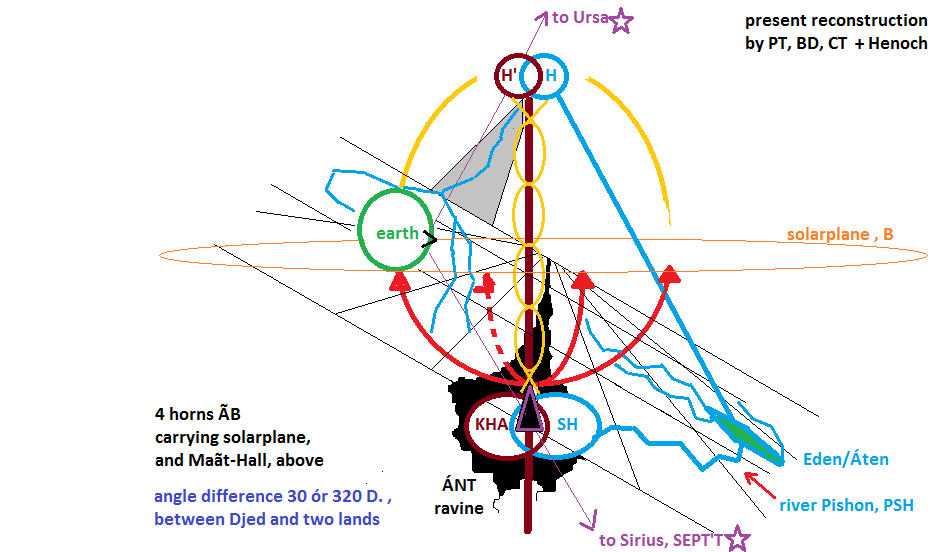